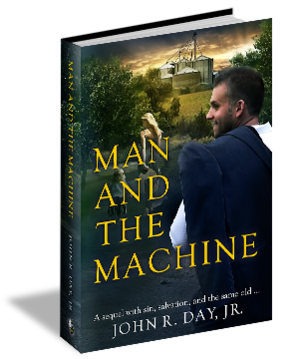 MAN AND THE MACHINE

A sequel with sin, salvation, and the same old ...

You can also visit us at JohnRDayJr.com and CowheadPublishing.com for more information.

Man and the Machine, the sequel to Man on the Fence, attempts to prove the adage that Karma is a … bad, bad girl.

Jordan Heller has traveled halfway around the world to escape the ramifications of his attack on Congressman Tate Daniels. What Jordan discovers is the hands of fate have a very long reach. Sent out of the country on a mission to serve the Lord, he encounters an unlikely guardian angel that saves him from a life with an undeniable expiration date.

Representative Daniels is able to exact a certain amount of revenge, but not in the manner he expected. After his near death experience, Tate finds strength and perspective in the sanctum of his family and friends. Having mended fences with Jordan’s father, Tate has a more difficult time patching things up with his other constituents. Rather than conform to majority opinion, the congressman insists on serving the public in his own way, regardless of the consequences.

Our heroes manage to live in the present, while planning for the future, but seem to run headlong into the past at every turn.

Get your copy of Man and the Machine.

​Haven't read Man on the Fence? Get your copy here.